How Will YOU Come Alongside Petey? Make a Difference HERE

“Don’t be ashamed of me Mr. Jeff but I have something to tell you.”

I had heard this line from Petey before and it was usually followed by a confession about: giving up on a responsibility or acting in a way that he regretted.

Knowing that he had just gotten a new job, I asked, “Does it have to do with work?”

As the look on Petey’s face changed, I could tell all that I needed to know.  Petey had quit his job after 2 days of work. This cycle had become all too familiar with Petey, a long time West Baltimore resident.  As unique as this lost opportunity sounds, it is something that occurs more often than not in my community.

In the mid 1900’s West Baltimore flourished with an abundance of African American men working in industrial jobs, especially with steel companies.  As companies started to cut back because of foreign competition, African American workers were laid off.  This fueled the economic decline of West Baltimore residents, and the community has never been the same.

I have hope for Petey.  He is currently applying to be one of the flag football referees with 10:12 Sports. If hired, Petey will attend 10:12 Referee School where he will be professionally trained to referee in the 10:12 football league and possibly other local leagues.
Although the league is seasonal, Petey will get a chance to take part in a job-training program in which he will feel EMPOWERED. Not only will he feel empowered, he will BE empowered to make decisions that will directly affect others, while working in and serving his own neighborhood at the same time.  He will also receive a competitive wage that speaks to his importance, along with support/resource opportunities to go to the next level in the officiating field.  Lastly, Petey will be in a community that constantly reminds him “he is loved, and he matters, because The God of this universe says so.”

NEEDLESS TO SAY, PETEY IS EXCITED!

In May, we will be employing and professionally training Petey and 9 other West Baltimore men in the job of Flag Football Officiating.

Help to make this EMPOWERING opportunity a reality for Petey and 9 other men of West Baltimore. 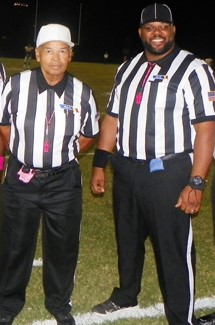